The kinetic augment is the latest breakthrough in biocybernetics. It grants a computer direct access to the nervous system of a player or mob. 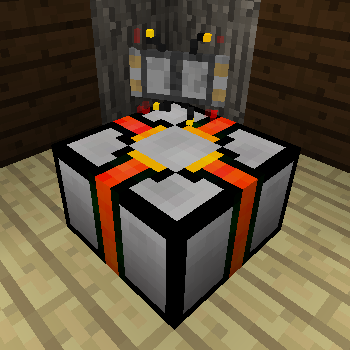 While the kinetic augment has a wide range of functions, the best place to start is the most fun: .launch(). This functions very similarly to a laser’s .fire() method: taking a yaw and pitch (horizontal and vertical angle) and a power. When called, this will catapult the current entity in the supplied direction, the resulting velocity depending on the provided power.

Combined with other modules, the kinetic augment can be used in great number of ways. One can fire yourself in the direction you’re currently looking, slow your descent if you’re falling to fast, etc… Take a look at some of the examples to get some ideas.

Kinetic augments can also be used as a turtle upgrade. When equipped, it acts as both a tool and peripheral. turtle.dig() or turtle.attack() will use the currently selected item in the inventory to break blocks or attack.

Beware, turtles do not use these tools with their normal finesse. Durability will be consumed, and blocks may take multiple swings to break.

If you’re a low-tech kind of person, you can always experience the joys of .launch() by hand. First, hold carefully grip the kinetic augment with either hand. Then charge it up by holding right click, feeling the raw power accumulate in your muscles. Finally release, and enjoy the feel of the wind rushing in your hair and the rapidly approaching brick wall.

The kinetic augment can be configured with the kinetic section of the plethora.cfg file.

Note: This is not an exhaustive list of configuration options for the kinetic augment - this only includes ones which require further explaination. Please consult the config file for a full list.