Modules are a way of exposing additional functionality to a computer. Generally this comes in the form of additional methods, but it may also add extra metadata providers, expanding the capabilities of other modules.

Unlike peripherals, modules come in item form and so cannot be placed in world. Instead you should use a Manipulator. This comes in two variants: Mk I and Mk II. The former can hold one module and the latter 5. Craft either one of these and place it next to a computer. Then grab a module, we’re going to use an entity sensor in this tutorial.

If you hover over the centre point of the manipulator you should see an outline of where the module can go. 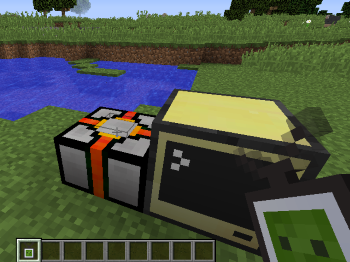 Right click to insert the module into the manipulator. You can right click with an empty hand to remove it again. 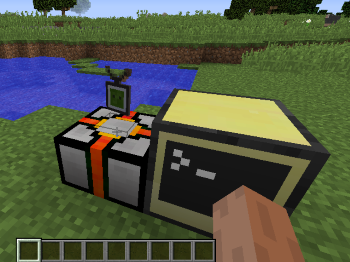 Now that we’ve got the module in there, let’s start doing some things with it. Fire up a Lua console and wrap the manipulator:

So firstly, let’s list the modules our manipulator has.

As expected, the list just has the entity sensor which we placed in. We can confirm the module is there with the .hasModule() method:

This is useful if your program requires the presence of particular modules and you want to fail gracefully are they not installed.

Finally we have .filterModules(). This filters the method list to those provided by the specified modules. This isn’t really useful for us as we only have one module, but when you have multiple modules installed, it is really useful if you only want to use one module’s methods.

Well, now that we know a little bit about the modules we have installed, let’s get cracking with them! Most modules will provide at least a couple of methods. As we saw from .getDocs(), the entity sensor provides .sense() and .getMetaByID(). We’ll start with .sense().

This provides us with a list of entities within an 8 block radius around the manipulator. Like .list() on inventories, this method provides only a snapshot of the surrounding entities. Its worth noting a couple of things about the data provided:

Let’s find out a little more about this player. For that we’ll use the .getMetaByID() function:

Blughr! That isn’t very useful. The issue here is the metadata contains functions which ComputerCraft can’t print out in a nice way. Let’s store it to a temporary variable and explore it that way instead. Whilst the original data is there, there is also data about the food and health levels of the player, the player’s armour and various states of the player such as whether they are sleeping or not. We won’t focus on it too much and will move on to more exciting things.

What distinguishes modules from normal peripherals is their ability to interact with each other. Namely, they can be composed.

Similarly, combining the introspection module and entity sensor allow you to find the current entity’s metadata.