The neural interface is a wearable computer with support for peripherals and modules alike. The key difference between this and the manipulator is that modules have direct access to the wearer. The use of this becomes apparent when you consider the kinetic augment, which provides methods to control the wearer. 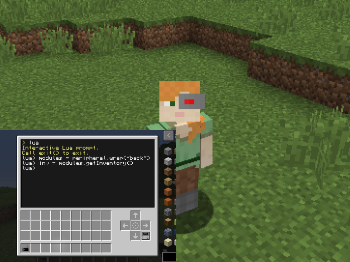 Note: You can’t place a neural interface on child mobs: that is just cruel. You should also be warned that once placed on a mob, the neural interface cannot be removed. Their brains are not as resilient to tampering as human brains are.

Note: If a neural interface doesn’t show up on a mob, it probably means it is a modded mob. Please file an issue with a link to the mod and the name of the mob.

Like turtles, the only supported ComputerCraft peripherals are wireless modems. However, there is also support for other mod’s peripherals, such as CCTweaks’ wireless bridge.

All modules which can be placed in a manipulator can also be placed in a neural interface. They will continue to function as before. There are some modules which require the neural interface, or function best with it. Modules can be found mounted on the “back” slot of a computer, bundled together in a manipulator-like peripheral. Wrapping this peripheral will provide you with the same methods as an equivalent manipulator.

The introspection module provides access to the inventory of the wearing entity, as well as useful information such as the entity name and id.

Note: It is possible to use the introspection upgrade in a manipulator by shift+right-clicking it to “bind” it to yourself. This obviously doesn’t work for mobs though.

The kinetic augment allows controlling the owning entity. Whilst this does have limited support for players, most methods require a mob of some sort. The method you’ll probably want to get started with is .disableAI() which, as the name suggests, prevents the mob from wandering around doing its own thing.

Note: Some mob’s instincts are just too ingrained in their psyche, even the neural interface cannot stop them doing what they’re gonna do.

One useful method is the .walk(x, y, z) method, which directs a mob to path-find to a position, ready to carry out your nefarious commands. Of course, if you want to get there faster, you can always use .launch(yaw, pitch, power) which contorts your muscles, launching you into the air in a hulk-like fashion.

Some mobs have their own specific methods, such as .shoot() on skeletons, .teleport() on endermen and .explode() on creepers. Do with that what you will. I hold no responsibility.

Note: Be warned, the neural interface is a fragile piece of equipment and cannot withstand the force of creeper’s explosions.